Final score from our Hamilton Beach TrueAir Room Odor Eliminator review: 96/100. Odor or foul smell is unpleasant and often unhygienic. The Hamilton Beach odor eliminator solves this problem effectively at minimal cost. Common sources of household odors include living close to a factory, construction site or chemical manufacturing plant, which can lead to the spread of foul smell all around. Even cigarette smoke creates an odor which can be very unpleasant. To counter such scenario the presence of good odor control is mandatory. 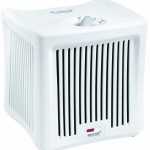 The Hamilton Beach TrueAir Odor Eliminator weighs around 4.1 pounds and is a very effective odor eliminator. It is capable of keeping a whole room smelling fresh and devoid of any smell or odor. The fan inside the odor eliminator sucks in the ambient air. The 3 carbon filters present inside, traps and neutralizes odors and releases the odor free air indoors. The odor eliminator can keep a 10′ x 10′ room smelling fresh for up to 3 months. This feature especially helps to keep the room fresh and devoid of any damp smell while the user travels for a long duration.
It also has a 2-speed switch, which can be used to vary the performance level according to the user’s needs. It is energy efficient and runs on less energy than a 15-watt light bulb. Apart from removing odor, it is also helpful in removing dust and visible airborne particles from the air. Users are provided with a provisional slot which can be used to put scented cartridges to spread a particular scent inside the room.

When the room is silent the sound of the fan inside the odor eliminator is audible.

This odor eliminator has a ACH rating of 5x.

This odor eliminator is especially useful for heavy smokers, as it helps to get rid of the cigarette smoke & smell, thus making the room completely odor free. This is a no-brainer.